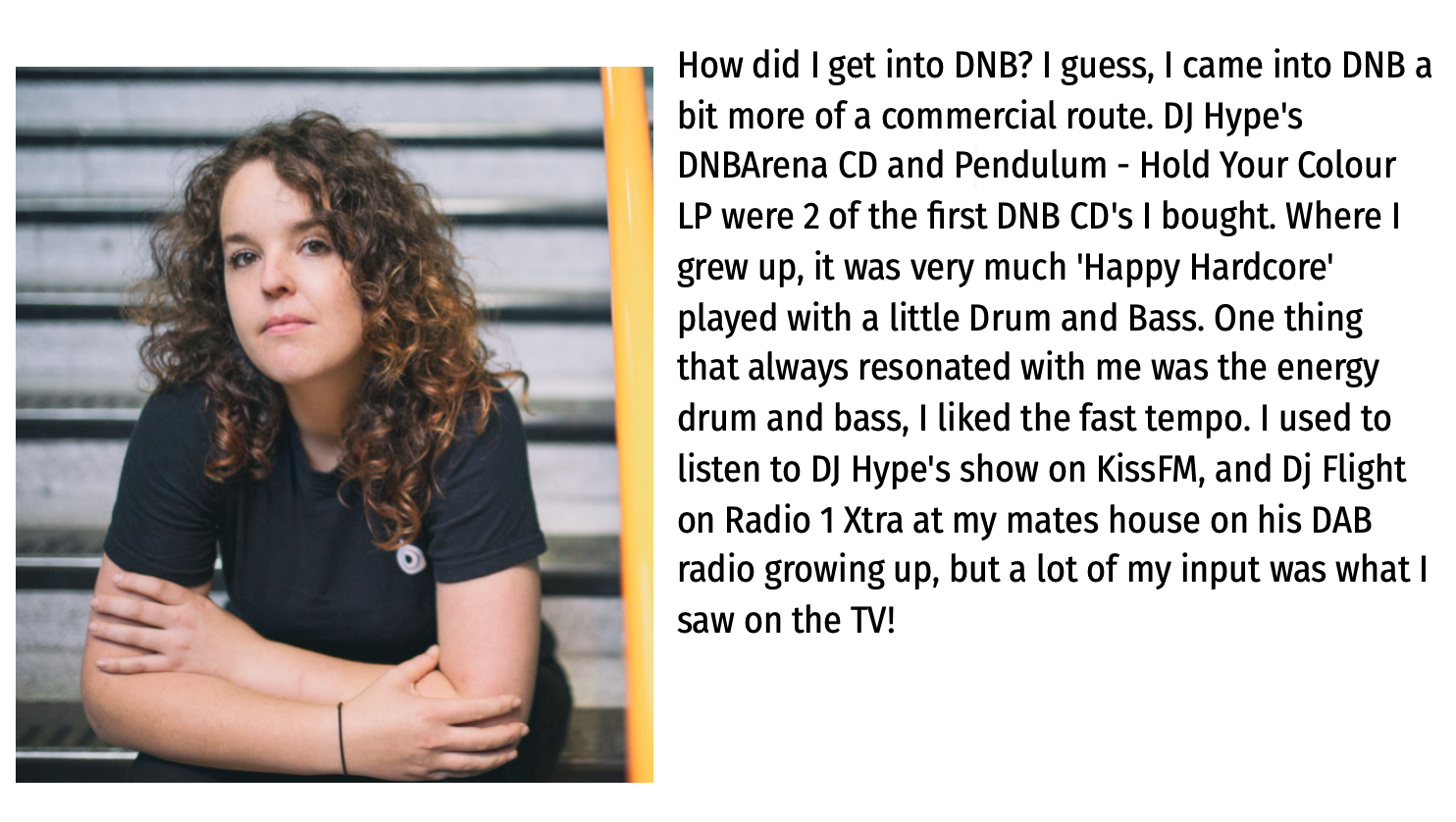 As you do, when you get to 18, nights out up town become regular. Whilst enjoying the night, the part I enjoyed the most was the token 3 Drum and Bass tracks they would play right at the end… usually consisting of Original Nutta, Chopper and Pendulum – Slam/ Tarantula. My friend from secondary school, Spectrum (he co-runs In-Reach.co.uk) would always find me at the end of these nights, and we’d dance to the DNB together and eventually he invited me to London for my first rave (which was Hospitality at Heaven in 2007) and the following year to SUNANDBASS 2008 (which was my first ever holiday). I had been DJing since I was 13 and mixing other genres, mainly UKG and Hip Hop, but once I got to 18 and started raving DNB was my new love, and there started my vinyl collection…. then the rest is historyyyyy.

Q. From your perspective, how have things changed for womxn in the
drumandbass community in recent years? What would be your hopes going
forward?

A. I think everyone can see there is more representation for womxn in the scene. It’s been great to see the amount of new producers and DJ’s coming through. I think it’s incredibly important for women to be producing if they want to be ‘up there’, and producing music that keeps up with the rest of the scene. Music production is so much more accessible these days, and the new talent coming through are already steaming through. We know this from the amount of amazing talent that applied for the EQ50 Mentorship 2020 Scheme.
Once thing that has been nice to see, is the amount of femxle collectives that have popped up. Most recently Dynamics – which is a directory of womxn in the DNB/140 scene. I feel there is a collective support and more of a closeness with all the womxn in the scene. We see each other.
Uplifting womxn has never been about excluding men or being womxn only… it is just about being equal, being up there with the guys and given a chance or opportunity. It doesn’t take a lot to find womxn to play at your night, or have a resident that is a womxn.
This year I feel people like – Sherelle and Mollie Collins are great examples of seeing womxn in high places – they headline events, are on major radio platforms and they both represent the LGBTQI+ family. And more strength to Sherelle being a black woman doing all of this.

Q. 2020 has been a tough year for a lot of us, has it affected your
creative output in any way? Is there something that you learned or
rediscovered about yourself during this time?

A. I have been working at a Hospital in London through this year, so as you can imagine, it has been a busy tiring year. I worked on the COVID wards for a couple months and have seen my work change dramatically. Everyone has had low points this year, and mine was right at the beginning. From what we were told, right when it all started: we were all gonna die of COVID, and I was gonna die more because I still had to go out to work. Looking at it now, I have been very humbled and am grateful to have been working (and leaving the house to work) as I know many friends have been made redundant, stuck at home or being self employed worrying about paying bills.
Not being soooo busy, has ment I have had more time to focus on music. Working a full time job and usually gigging on the weekend makes it quite hard to make time for it. So, this year has actually meant I have finished some projects, and this has led to my first solo EP forthcoming on Spearhead Records soon. To be honest, it was about time for the SweetPea. This has given me confidence in my music, and definitely the boost to crack on. After lots of learning and collabing, it was time to focus on my solo stuff.