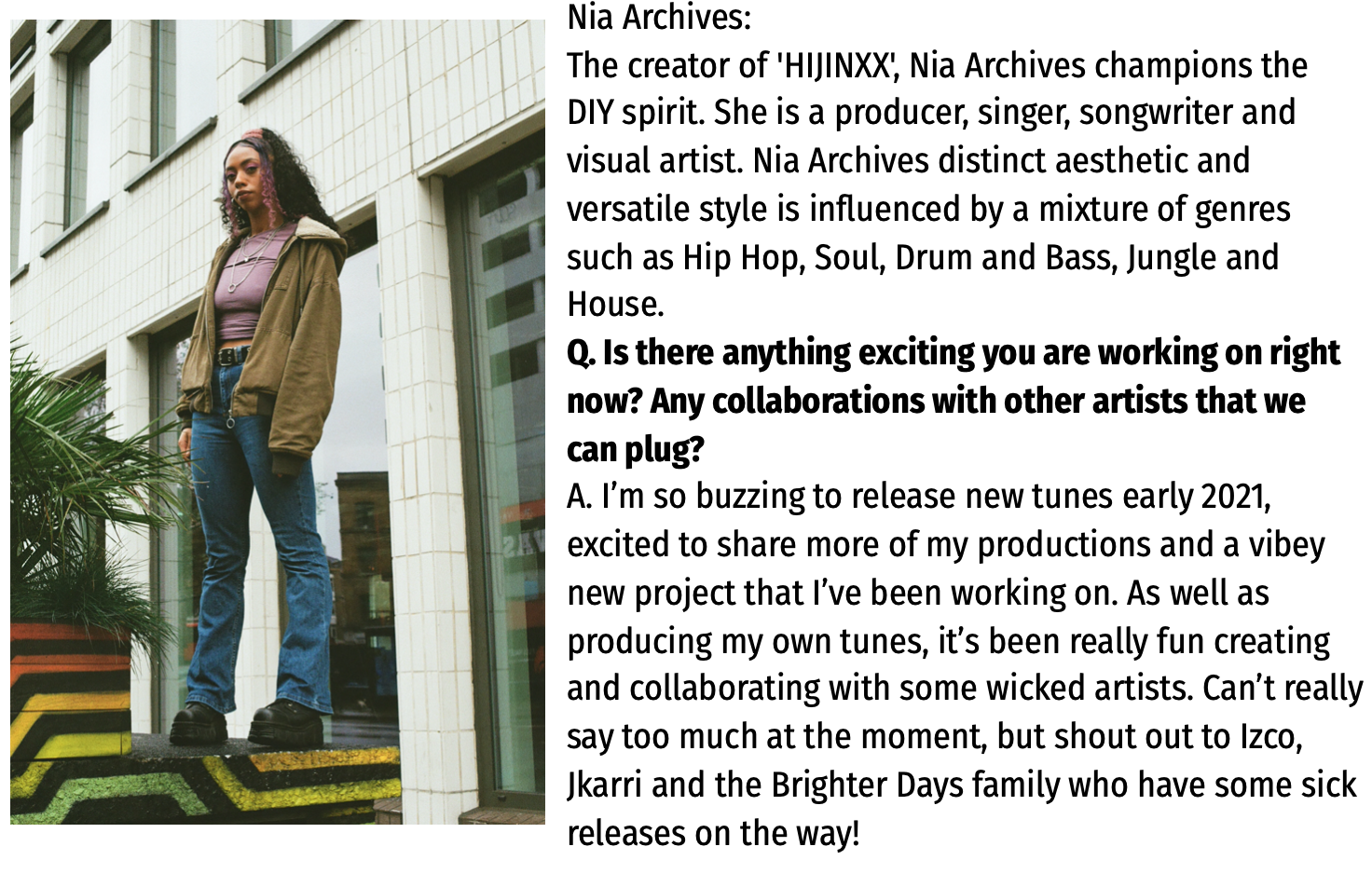 A. I have to big up my tutor Jason, who is an absolute legend for telling me about the EQ50 mentorship program. I love what EQ50 is about and I’m so buzzing to be surrounded by a community of womxn who have the same passion for DnB and Jungle as I do. People and community are so important, for me, that was one of the main factors that drew me to this program. I’m also buzzing to work with V Recordings and their team! Looking forward to developing my production further, collaborating and creating some vibes.

Q. How has the EQ50 mentor ship affected your work as an artist?

A. For me, I have found the program has helped me focus on developing my production style and working with DJ Flight, Bryan Gee and everyone at EQ50 has been wicked. Looking forward to all the growth that is to come in 2021 – definitely going to be fun!

Q. We have seen some well needed positive changes happening for womxn in many industries around the world in recent years. Looking to the future, what would be your hopes for womxn artists?

A. I think that movements such as the EQ50 program and Hospital Records’ Women In D+B program are positive steps to making changes. For me, the progress I would like to see happen would be: seeing more Black womxn represented in the scene, more diverse lineups and also for the term ‘Female ____’ to be eradicated. So many people refer to us as ‘female producers’, we’re producers, period. 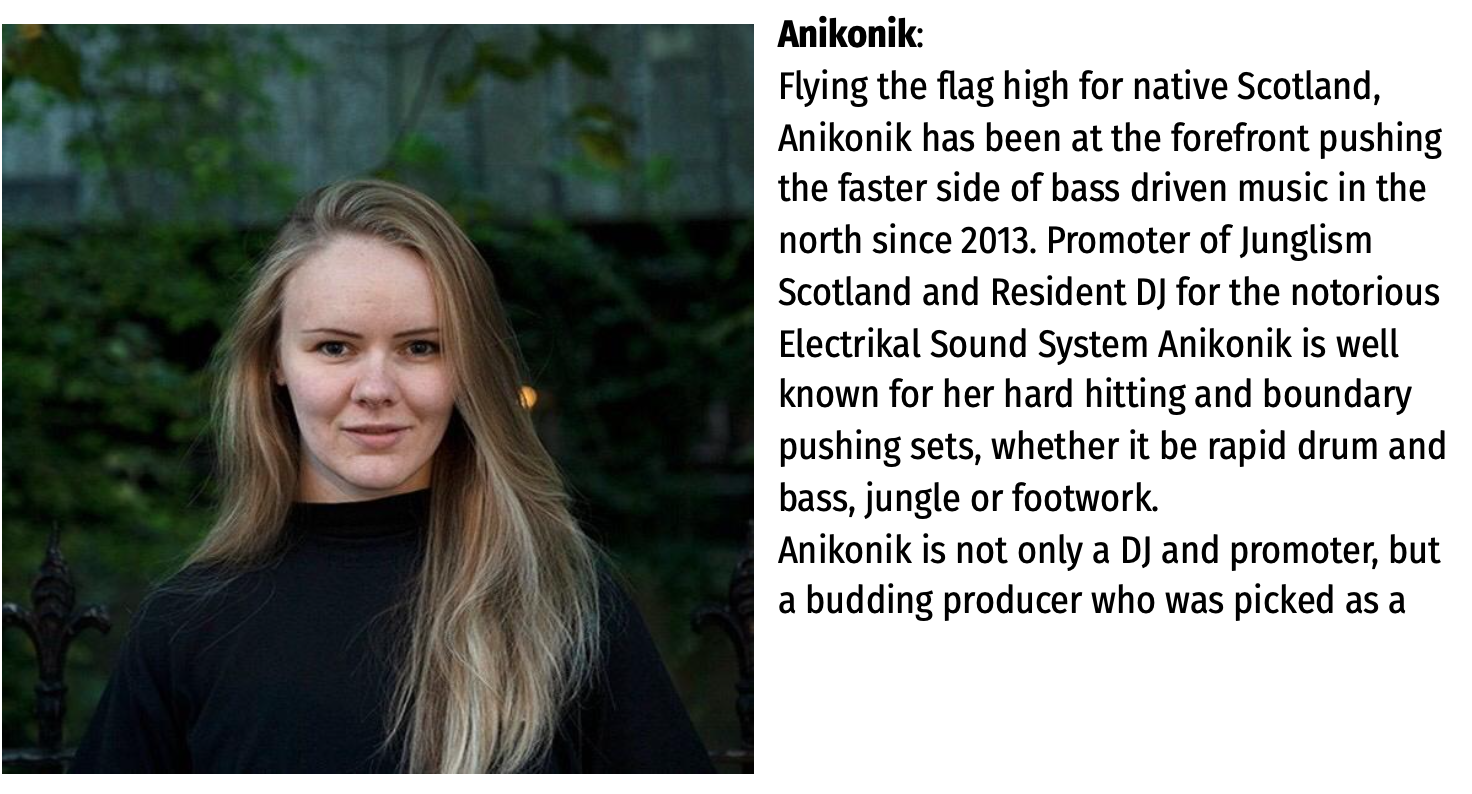 mentee by RAM Records for the EQ50 mentorship program this year. The dance floor is a sacred space for Anikonik, and having the privilege of working with one of the UKs best sound systems means a lot has been learned in terms of music quality and what it is that drives people to dance. This knowledge is currently being applied to her productions, in which she is in no rush to release – until the quality is high and the vibe is absolutely perfect.

Q. Who are your influences?

A. I pull influences from all over the dnb spectrum, from the tearout energy of A.M.C to the humble craft and skills of Om Unit. The six figure gang and their productions/work have been a favourite of recent, and of course the whole crew at EQ50 I have been admiring for time

A. It’s a total honour to be a part of their mentorship programme, it came about at the right time where people are finally starting to notice and pay attention to the lack of diversity in the scene. Applying was a no brainer because I was very much one of the womxn who had no idea who or how to contact labels and such once my productions were ready, all the knowledge supplied will be a huge help in taking my passion to the next level.

Q. What are some of the positive changes you have seen happening for womxn in music in recent years? How does this affect you going forward?

A. There is a plethora of talented womxn coming through, it’s amazing to see it. One thing I believe firmly is that having women on line ups will only encourage more to come through, it reaffirms womxn that they too can in fact do it if they want too. There’s still a lot of tokenism and misogyny which needs to be firmly stamped out but I don’t think I will be long until this is the case. It’s been wonderful having the support of the womxn at EQ50 and beyond, and I hope to help and inspire as many womxn as possible going forward.

Q. Is there anything exciting you are working on right now? Any collaborations with other artists that we can plug?

A. I’m currently working on my debut EP full of my best work to date, which is incredibly exciting.  I can’t give too much away right now but I am so so lucky to be working towards a release with this label.

Q. Who are your influences?

A. My biggest influences at the moment are definitely Rizzle, Amoss and Creatures. Although crafting my own unique sound is important to me, they all capture that deep sound I’m aspiring to create, and consistently release incredible tunes!

It’s still early days but I am loving every moment so far. I’ve set some huge goals and having Kasra support me through the process is unreal! Being able to get regular feedback on my music from both him and my EQ50 mentor Natasha (Sweetpea) is amazing too, they’re both so supportive. Feeling so grateful for this opportunity!

Q. We have seen some well needed positive changes happening for womxn in many industries around the world in recent years. Looking to the future, what would be your hopes for womxn artists?

I just hope that rave and festival line ups start consistently showcasing all of the amazing womxn artists that are out there, but not just  because they’re “trying to be inclusive”. At this point we’ve earned the opportunities, purely because we’re talented and exciting enough. It’s 2020! Womxn in dnb shouldn’t have to feel like they still need to prove themselves, and we don’t want to build a career off performative gestures, (such as asking us to play a set on a night as you’re specifically trying to get more womxn to play).